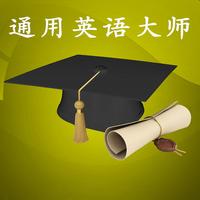 iPad
More Screenshots for iPad
通用英语大师 Description
This flashcard app will help Chinese learners master general English. It teaches the most common vocabulary and collocations of general English in the form of phrases. Included are over 2,500 phrases taken from James Rogers’ PhD research. This is a whole new way to study language that researchers agree is the most efficient. Research has shown this app to be linked to increases in TOEIC scores, and thus it will help you master general English.

By studying chunks, students are mastering the language the same way natives do. Through the chunks, students kill three birds with one stone by learning vocabulary, collocations, and indirectly through exposure to it in the chunks...grammar. Until now, nearly all materials still teach isolated vocabulary items and grammar separately but this has been shown to be very ineffective. Thus, is it clearly better to learn the way natives learn because this method obviously creates fluent speakers. Researchers have known this is the best way for years, but materials still don’t teach the language in this way because until now, there has been no large-scale chunk list to refer to. But now there is!

These contents are also special because in fact, there originally were over 11,000 chunks in this list. However, we translated them and chose only items that were said in different ways in Chinese to an extent. Thus, we ended up with approximately 2,500 chunks. When something is said in a different way between two languages it is harder to learn, and students have a high chance of making an error when they try to say it. Therefore, by focusing on these 2,500 Chinese learners can focus on the tough items and avoid making errors.

Audio for all the contents is included as well. Also included is a custom quiz function which you can use and send your results to your teacher with via email. This app also automatically sends all items you miss often to a special “difficult cards” folder to make it easy for you to concentrate on them. What’s more is it features one of the most advanced Leitner algorithms on the market to help you learn more efficiently: you mark items you don’t know wrong and they come back more often, giving you the necessary exposure to master them. Items you mark correct don’t come back as often, so you don’t have to waste your time with items you already know. This method has been shown to be the most ideal way to learn in linguistics research.

We hope our app helps you improve your English!