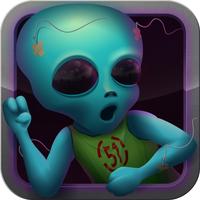 What could be better that a game where you are an alien running from evil humans? Get ready for great fun with Area51: The Great Alien Escape from Planet Earth game.

In this tense and exciting running game, you are the alien. Imagine that you were captured by evil humans, hooked up to machines, examined, probed (not in a good way), analyzed and scrutinized, and finally found an opportunity to escape. You would not only take it, but you'd also make sure you left wearing a really cool "I ESCAPED FROM AREA 51" t-shirt. And then you'd run like heck.

◊ Luckily the humans helped your cause a little…

It sucks that you have to run through the desert (aliens don’t look like they have very good lung capacity), but fortunately the humans did provide you with opportunities to power-ups, accumulate nuke coins, learn to jump higher, get stronger weapons and a variety other methods to help your escape cause.

◊ Can an alien get a snack here?

Maybe you just wanted to make a quick stop on earth to refuel or score a cheeseburger, but that sure didn’t work out. Youda thunk that maybe your minions could have given you a heads up that the humans were on your trail. But no, you had to be captured and escape on your own.

And now that you’re free, you have to stay ahead of those cruel, heartless, human pursuers, dodging obstacles and annihilating them when they get too close.

When you were back on your planet, you were probably thinking how dumb humans are. Okay, that may be true, but now they are pursuing you and you know this isn’t one of the ways you wanted to die. So, run alien, run.

◊ Running from the government…we can all relate

Sure, we all want to do our part to support our government, but it sure feels like they always want something from us: our money, our votes, our undying love and devotion. And it’s frowned upon if you run away from them. Until now. Play Area 51 and learn to stay a few steps ahead of the government and the military.

◊ Turn the tables on the humans

Think of all of the zombies and aliens you’ve killed over the years. Isn’t it time for a change of pace? Now, that you’re the alien maybe you’ll get a different perspective on those cruel, heartless, humans. Or maybe you’ll just have lots of fun running your little alien bu#% off playing Area51: The Great Alien Escape from Planet Earth game.