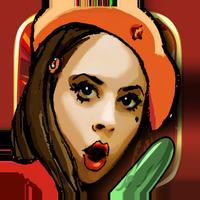 iPad
More Screenshots for iPad
Artworld War 1 Description
JOIN THE REVOLUTION!
ArtWorld War I is based on the radical performances and actions by the Artist BADDY DOLLY JANE. Her performances take place always in connection with the art world. This provocative game allows the player to recreate BADDY DOLLY JANE'S journey through the world of art. You will move from one setting to including New York, London, Berlin, Vienna and Basel to name a few. As with Baddy's live performances, the player will be able to confront art stars like John Currin, Kanye West, Ai Wei Wei, Marina Abramovic, Mark Jacobs and others with a cucumber.

THE CREATION HISTORY OF ARTWORLD WAR 1
AWW1 was created by the graphic designer and developer Swiney the Art Pig. The art stile was inspired by revolutionary posters and many artworks of the time of The Enlightenment and today. It was coded by and under the supervision of Professor Dr. Stefan Radicke of the Stuttgart Media University and his students.

BASED ON A TRUE STORY
For too long the world has focused on green pigs stealing eggs, while the real threat is somewhere else entirely… A group of real pigs have taken over the art world! They are occupying the main art hubs of the world turning them into pigsties filled with filth – for example The Guggenheim Museum, the Tate Modern and Serpentine Gallery. The freedom of art has been enslaved.
But wait no longer – We are supporting our radical good friend BADDY DOLLY JANE. As a celebrated artist she was herself part of that pack of bad pigs and turned against them. In the name of all good pigs she has decided to fight for the freedom of art. Naturally, she has equipped herself with a cucumber to start a revolution…

WHY WE MADE ARTWORLD WAR 1
In all seriousness - the game is about rehabilitating the honour of pigs. Green pigs don’t exist, real pigs do, so we created ArtWorld War I. The cool real life performances of BADDY DOLLY JANE were a great inspiration.
Nerds (Our esteemed comrades) can fight in over 70 levels on their pigPhones, pigPads and Android-whatever’s. OINK, OINK.