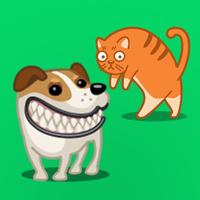 iPad
More Screenshots for iPad
Cat Sounds Dog Translator Description
This app provides a lot of cat sounds and dog voices. You can listen to any sounds of cats and dogs in different scene. Sometimes, you might be able to communicate with your pets by using the translator feature!

With this app, you’ll no longer lose your cats or dogs. Whenever you want to find them, you just start the app and play some sounds and your pets will appear immediately!

You might discover more interesting methods to play these sounds by yourself. Let’s go try this app now! It is completely free!