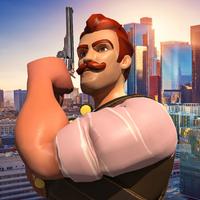 Do you like military sniper games or unknown shooting games? Try to survive on crazy epic battle shooting arena game after apocalypse in the tone city! Jump out of the survival helicopter on the dead island, kill the enemies, mafia and thugs in this shooting game. BUT be afraid of the boss, it does significant damage! Shoot with AK, gun, smg, multiple-barrel and other weapons. BE THE LAST Man survivor in this sniper shooting game! You are a special training SWAT officer, skilled in using all kinds of snipers, machine guns, and other weapons; You were dispatched to rescue people trapped in the mafia town, fight against terrorists; The task is very arduous, keep calm, hold your breath, pull the trigger, and survive in this shooting game.

BECOME THE ULTIMATE SILENT ASSASSIN Step into the shoes of Agent 47 in Sniper and discover the most compelling sniper experience on mobile. Hone your strategic skills and orchestrate the perfect assassination kill shot with one bullet. Come embark on a world-class battle royale NOW! You are a professional battle commando shooter, your mission is to destroy all enemies. Hold your gun and find the terrorists around you through the radar in this third person shooting game.

Forget those dumb, repetitive shooting games. Here, your duty will include racing against time, exploding helicopters, killing zombies and quite a few shots in slow motion. Survival is necessary! Get your best shooter or sniper and combat on the frontline in this shooting game.

It’s time to take action in the battlefield. Shoot to kill in special ops and survive in this addictive sniper shooting game! Scout through immersive environments, engage in rapid-fire combat and build the ultimate super-soldier as you customize their state of the art gear.

This is a front-line action war game. As a heroic warrior, in the front combat zone, use machine guns, shotguns and sniper rifles and other modern combat weapons to kill all kinds of brutal enemies. Use your excellent fighting skills to kill all enemies! There are the most advanced military equipment. With other elite special police snipers, infiltrating the evil group to eliminate the notorious terrorists. You are a well-trained elite sniper, accepting secret missions, and eliminating terrorists.

Destroy Limousine Cars and sports cars.
Destroy army helicopter that’s shooting you, Pick your favorite gun or use Sniper to destroy helicopter with single shot.
Kill mafia boss and his all gang members and many more levels.