GoExplore Canada Not Available
Removed from the App Store 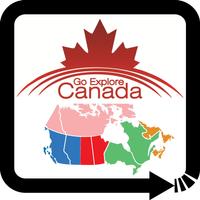 All rolled into one FREE app: GoExplore Canada -- where to go, what to do, where to stay, where to eat, where to play and just ‘where the heck am I?’

GoExplore Canada gives you a completely different way to see this great country from Atlantic to Pacific, including the great Canadian Arctic.

The totally interactive Google Map holds it all together. You zoom out for the big picture (and it’s big, big, big) or zoom into any city, town, village or spot in the vast Canadian nation. It contains thousands of Canada’s top attractions and natural wonders.
Also included: Canada’s top hotels and restaurants; lists of essential services, clubs and entertainment, tour busses, taxis, arrivals/departures (air, bus, train), car rentals, gas stations, parking lots, shopping districts, antique stores, drug stores, movies, etc.
You can find them all on the map or search by category. GoExplore Canada uses the familiar Google Map, locating you as a GPS pulsating blue dot surrounded by color-coded pins (Points of Interest).
And now go Explore Canada lists hundreds of Special Events and Festivals happening throughout the country but conveniently, you only see them if the event or festival is coming up soon enough for you to attend.
GoExplore Canada has become the Official App of the Canadian Antiques Roadshow and with their assistance will provide travelers with comprehensive information about collectibiles, antiques, dealers and antique events throughout Canada.
GoExplore Canada has also been named the Official App of Bay of Fundy Tourism – a Partnership which includes travel industry and the Provinces of Nova Scotia and New Brunswick. You can thoroughly explore the fabulous Bay of Fundy within the app and even vote for the Bay in the New 7 Wonders of Nature contest!

After you download the free app, you’ll have access to scores of different Canadian communities and venues, all with their own pins offering a picture, address, phone number, description and links to web sites, many listings with their own video/multimedia presentation.

GoExplore Canada was produced by goExplore.mobi Inc. an apps production company owned by Canadian producers with deep roots in film and television production. The producers of the app would love to hear your comments, observations, suggestions or (even) corrections! And they'd love to hear your stories and see your pictures of exploring Canada. Post them to the GoExplore Canada fan page on Facebook or send them to info@goexplore.mobi.
Show More Show Less
GoExplore Canada 16.48.1 Update
2018-06-07 Version History
Bug fixes
More
16.48.1 2018-06-07
Bug fixes
More Information