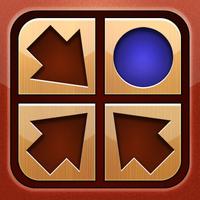 iPhone
Jabeh Description
"For the money, Jabeh is a must have for anyone who enjoys puzzle games." ---iPhone Alley

"The game is really fun and... I hate to put the word addicting in a review... but it is addicting." ---appVersity.com

"The application is slick in all areas and you will easily spend hours trying to solve so many puzzles." ---148apps

"I would highly recommend this game... I found myself enjoying it quite a bit." ---iphoneappdaily.com

Engage your mind with the most addictive logic puzzle for iPhone and iPod Touch. In this mix of Sudoku and Minesweeper (based on Shinro), you exercise your deductive skills to find the hidden stones in each puzzle, while enjoying Jabeh's original soundtrack and art.


HOW TO PLAY
• The Jabeh board has 12 hidden stones that you need to find.
• Arrows on the board point in the direction of one or more stones.
• Column numbers show how many stones are in that column.
• Row numbers show how many stones are in that row.
• By crossing out the boxes on the board, you can determine which remaining boxes contain the hidden stones. Find all 12 stones, and you've completed the puzzle!
• Every single puzzle can be solved using logic. You'll never have to spoil the fun by guessing.

FEATURES
• A stunning user interface to please the eye of any gamer.
• Original artwork decorates each of the 9 different board styles. Watch as the art comes into full view each time you solve a puzzle.
• 10 entrancing musical themes play while you solve puzzle after addictive puzzle.
• Swipe and tap the Jabeh board to cross out boxes and mark stones around the board.
• View your statistics, then play more puzzles to improve your time and rank.
• Automatically checks for new puzzles every time you start the game!
• Download the soundtrack for free from http://jabeh.org
• See how many puzzles are currently available in the game at the @jabeh twitter page, http://twitter.com/jabeh

/From now on you won't see repeated puzzles until you've finished every unsolved puzzle in your difficulty.
/If you're playing a solved puzzle, there will be a little asterisk in the title (Jabeh*)
/Now you'll see the network activity spinner when Jabeh checks for updates at launch.