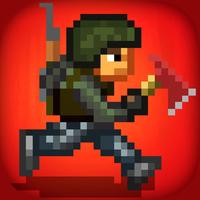 iPad
More Screenshots for iPad
Mini DAYZ: Zombie Survival Description
How long can you survive in a post-apocalyptic world? Find out in Mini DAYZ now - an official pixel art rendition of the massively successful PC survival game - played by over 3 million fans.

It is you against the world in Mini DAYZ: explore a randomly generated map and scavenge for food, ammo and supplies. Use anything you find to craft advanced items. Protect yourself against aggressive infected and ferocious wolves. But most important of all: make sure to stay dry, warm and well fed at all times. The weather out there can quickly get under your skin and your wounds will not heal without you treating them…

There are no rules, except one - to survive.

Please note the game is in soft launch. We apologize for any technical issues you might encounter.
1.0.1 2016-12-20
- Tutorial level added
- Difficulty rebalancing
- Ability to choose different playable characters
- Visual difference between islands (terrain textures)
- Dpad (stick) movement control type added
- Inventory update: items can be picked up from the ground by drag and drop
- Fixed app crash after being suspended
- Performance update