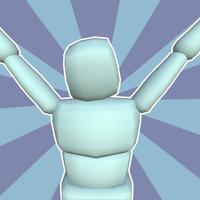 iPad
More Screenshots for iPad
Smash Room Description
Beat, whack, kick, punch, stab, shoot, or do anything you want to this dummy! Feeling angry and frustrated? Open your iPhone and unleash your feelings to the dummy. Whenever you’re upset and want to take revenge on someone, just put their face on this dummy and do whatever you want to them. This is FREE game for every angry dude out there. Download and enjoy smashing this ragdoll now!
We often feel angry and upset at someone.super smash flash,smash dude,smash games,super smash bros,smash hit! Most of us experience anger towards our boss, annoying coworkers, and even our own buddies. We often just want to lash out and hit the boss. We create a perfect game where you can kick your buddy, kill your boss, and beat the boss or other people who make you angry. There are so many things you can do to this dummy! You can hit, stab, torture, and do whatever you want and you can even stick a picture of your most hated person to the ragdoll’s face! We will even reward you with points and coins. Super Smash & Kill the Dummies. The best killing time game!

-Download and play our super smash game for FREE
-Beat, whack, kill, or do whatever you want to the dummy
-Collect coins after beating the ragdoll
-Purchase various weapons to torture the dummy
-Restore dummy.
-Take a picture of your work and share it
-Play this game whenever and wherever you want!

What can you do to the ragdoll or dummy in this game?
-Punch it using the boxing glove
-Beat your boss with the baseball sticks
-Kill the boss by throwing some darts or arrow.
-Throw colorful balloons.
-Throw eggs and tomato to the stickman / dummy.
-Shoot it with your gun.
-Stab it or slice it with a knife.
-Use spiked stick to whack it.

If you aren’t satisfied with the FREE weapons and methods, you can purchase even better and more powerful weapons! We have spear and fork to stab the ragdoll, lighting to electrocute it, laser, and even flamethrower to burn and cause a satisfying explosion! Just purchase these additional weapons with In App Purchase.

HURT THE PEOPLE WHO HURT YOU!
This is your chance to hurt the people who hurt you without consequences.smash hit,ssf2! You can act like a street fighter delivering punch and freekicks to his enemies. It’s very therapeutic to deliver a punch to the person who annoys you every day. Don’t let your emotion explode and cause problems in real life. Just use this app to release your pent up frustration and anger. You can do it anytime, anywhere, even when you are at the office.

NOTE: This is a very violent and bloody game. We do NOT recommend this game for children and we are not responsible if underage kids get a hold of our game. If you are parents, please be responsible and keep an eye on what your kids are playing on their smartphone.