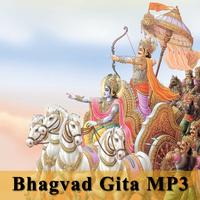 iPad
More Screenshots for iPad
Full Bhagavad Gita MP3 Description
Bhagavad Gita, is a part of the 5th Veda (written by Vedavyasa - ancient Indian saint) and Indian Epic - Mahabharata. It was narrated for the first time in the battle of Kurukshetra, by Lord Krishna to Arjun.

The Gita is set in a narrative framework of a dialogue between Pandava prince Arjuna and his guide and charioteer Krishna. Facing the duty as a warrior to fight the Dharma Yudhha or righteous war between Pandavas and Kauravas.

Bhagavad-gita, a philosophical poem comprising seven hundred Sanskrit verses, is one of the most important philosophical and literary works known to man. More commentaries have been written upon the Gita than upon any other philosophical or religious text in history. As a classic of timeless wisdom, it is the main literary support for the oldest surviving spiritual culture in the world-that of India's Vedic civilization. Not only has the Gita directed the religious life of many centuries of Hindus, but, owing to the pervasive influence of religious concepts in Vedic civilization, the Gita has shaped India's social, ethical, cultural and even political life as well. Attesting to India's nearly universal acceptance of the Gita, practically every sectarian cult and school of Hindu thought, representing a vast spectrum of religious and philosophical views, accepts Bhagavad-gita as the summum bonum guide to spiritual truth. The Gita, therefore, more than any other single historical source, provides penetrating insight into the metaphysical and psychological foundation of India's Vedic culture, both ancient and contemporary.

The influence of Bhagavad-gita, however, is not limited to India. The Gita has deeply affected the thinking of generations of philosophers, theologians, educators, scientists and authors in the West as well Henry David Thoreau reveals in his journal, "Every morning I bathe my intellect in the stupendous and cosmogonal philosophy of the Bhagavad-gita ... in comparison with which our modern civilization and literature seem puny and trivial."

The Bhagavad Gita, also referred to as Gita, is a 700–verse Dharmic scripture that is part of the ancient Sanskrit epic Mahabharata. This scripture contains a conversation between Pandava prince Arjuna and his guide Krishna on a variety of philosophical issues.

The only available Gujarati translation of BhagavadGita, this great poem is made available on this application for the first time. It is a humble attempt made by webmaster to present it in this way to facilitate easy reference. One would derive great pleasure by just reading the Gujarati version as it keep intact the storyline. The tune and meters of poetry are also not exactly replicated in Gujarati yet, in their own they are pretty consistent.
Show More Show Less
Full Bhagavad Gita MP3 1.4 Update
2019-09-21 Version History
- Few Bug Fixed
More
1.2 2018-11-02
- Layout issue fixed
More Information