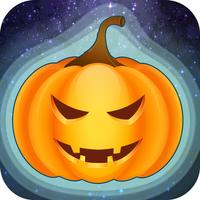 iPad
More Screenshots for iPad
Happy Halloween Pop Description
Legend has the Celtic,in Ireland,Scotland,and other land,which lived in the first five hundred years ago,October 31.They think the day is the official end of the autumn,the beginning of the new year,the harsh winter of the day.At that time,people believed that the dead of the enemy would return to their former residence in the living on the day to find creatures,and to borrow this regeneration,and this is the only hope that people can get regeneration after death.And the living people fear the death of the soul to seize the life,so people on this day,put out the fire,candlelight,let the dead souls unable to find the living,and dressed themselves as demons to frighten away the souls of the dead.Then they will rekindle the flame candles and start a new one-year life.
Legend: The symbols of the Holy Night are Pumpkin lanterns (also called Jack Lights,Jack Lanterns),and the story of the pumpkin carving out the empty lantern.This is originated in ancient Ireland.The story is called a pumpkin lantern
Jack (English: Jack) is a drunken man and loves mischief.One day Jack cheated the devil on the tree,then carved a cross on the stump,threatening the devil to make him dare not come down,then Jack and the Devil Friends,let the devil promised to cast Jack never sin for the condition of letting him down the tree.After Jack's death,his soul can neither heaven nor hell,his undead have to rely on a small candle to guide him in heaven and earth.In the ancient Irish legend,this little candle is put in a hollowed radish,called "Jack LANTERNS",and the old radish lamp evolved to today,the pumpkin is made of JACK-OLD-LATERN.It is said that Irish people to the United States soon,that the discovery of pumpkin,regardless of origin and sculpture is better than radish,so pumpkin became a Halloween pet.
Game features:
Virtual and realistic scenes!
Candy Fun!
Puzzle of Intelligence!
Smooth picture!
Casual fun!
It's FREE!
You can also share it with your friends.Are you ready?
Show More Show Less
Happy Halloween Pop 1.0 Update
2017-05-23 Version History
More
1.0 2017-05-23
More Information