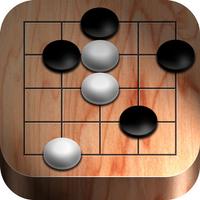 iPad
More Screenshots for iPad
Little Go Description
Little Go is a free and open source iOS application that lets you play the game of Go on the iPhone or iPad. You can play against another human (on the same device), or against the computer. The computer player is powered by the open source software library Fuego (http://fuego.sf.net/). The minimum requirement for running this version of Little Go is iOS 8.1.

Features:
- Board sizes between 7x7 and 19x19 (start a new game to change the board size)
- Let the computer player make a move for you
- Calculate the score at any time during the game (area scoring is the default, territory scoring can be selected at the start of a new game)
- Adjust the computer's playing strength and resign behaviour by selecting from a number of presets, or by fine-tuning advanced settings
- Play even games, or games with 2-9 handicap stones (fixed stone placement)
- Select from 5 pre-defined rulesets when you start a new game, or adjust game rules to your preference (komi, ko rule, area/territory scoring system, number of passes to end game, resume play by alternating/non-alternating play, four passes end game)
- View board positions for moves played earlier during the game (no support for game variations, though)
- Discard moves (aka "undo")
- Display move numbers and coordinate labels
- Zoom & scroll board
- Display player influence (aka territory statistics) for an estimate who owns an area
- Computer vs. computer game for entertainment
- Save & load games to/from the archive
- Use iTunes file sharing to transfer saved games to/from your iOS device
- Import/export game files from/to other apps on your device (e.g. Mail, DropBox)
- In-app user manual (text-only)
- Submit bug report email from inside the app (yes, this *is* a feature :-))
- For the technically inclined: Watch what happens behind the scenes when Little Go and Fuego talk to each other over the Go Text Protocol (GTP)

Your contribution in any form (coding, UI design, testing, bug reports, creating an app video preview, website design) is welcome - please contact me or visit the project website (http://littlego.herzbube.ch/) to find out more.

A note about the project state: Several years of development have gone into Little Go since its inception in January 2011. The app now has a feature set that is, I believe, quite nice :-) for a free program. My main focus will therefore lie on fixing any remaining bugs (of which I am sure there are plenty) and keeping the app running under future versions of iOS.

Little Go is released under the Apache License 2.0 (http://www.apache.org/licenses/LICENSE-2.0).
Show More Show Less
Little Go 1.5.1 Update
2019-03-24 Version History
This is the Little Go bugfix release 1.5.1. It contains a fix for a bug that causes the app to crash during launch on iOS 9.x and below (#332). Thanks to Li Chen Ke and Dennis for reporting the issue.

The previous release was the Little Go feature release 1.5.0. It contains the following changes:

Features
--------
- Added a board setup mode (#276). When you start a new game, instead of beginning to play you can now switch to board setup mode. In this mode you can place black or white stones in any order and combination to set up the initial board before you begin to play moves. In addition to placing stones, you can select the side which is to play the first move. Read the "Board setup" section in the in-game manual for a detailed feature description.