The Round Table Knight's Free Get 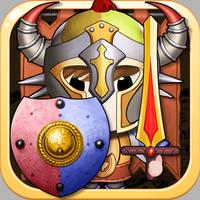 The Round Table Knight's

iPad
More Screenshots for iPad
The Round Table Knight's Description
Be confused by numbers in the 2048?
Be tired of upgrading weapons and castles?
What?! Recruiting soldiers only by playing funny games?
The higher marks, the more soldiers!
The Knights bring you a special fresh experience!
Become the King Arthur now, gather more knights, go get your own castles!

In the background of the King Arthur’s story, the Knight’s of Round Table is based on the pattern of 2048. Combining siege mode, endless recruiting mode and special items systems, this game will definitely bring a super cool experience to players！


Story Mode:
The unique story and levels
Knight’s 2048 is different from other games, knight's features innovative story mode, each level has different clearance requirements and limited number of steps, allowing players to challenge level by level, winning higher score!
Under story mode we have a reinforce system, sending with the reinforce soldiers directly into the battlefield, and helping players move troop rapidly. Reinforce system could greatly shorten the time!

Back in time, second chance
Wrong move? Stuck? Pressed the wrong key? Don’t be afraid! We have an item that can rewind time and space, so do not be afraid wrong step, step back and get back in the right direction. But that item can only be used three times per level, three times, three times, u must be careful, after three big times...... even god can’t help you!

Endless mode, bomb strike
Knight's features Endless mode, there is no clearance requirements and number of steps within the Endless mode, but…but…but…does it mean good player will be able to storm it? No! Bombs will be planted in Endless mode randomly, after countdown, it will explode and destroy the army, but there are also advantages side, bombs could also be used to destroy obstacle and block, reforming the army, will my lord use bombs to assist the army or destroyed it?
Show More Show Less
The Round Table Knight's 1.1.4 Update
2015-10-26 Version History
This update
Repair Ios 9 bug that can't use siege war.

Rules Introduction:
Siege Mode: Siege mode is added to the game in this version. Clicking the button “siege” on the lower left corner, it will turn into the siege mode. In the siege interface, now there are 10 castles for players to attack temporarily. Castles have three different sizes:large, medium and small which can not be attacked until you have 32000,20000,12000 soldiers correspondingly. After occupy the castle, you can have different rewards according to the level of the castle. The longer you occupy, the more rewards you get. You can set bombs and reinforcements to defend your castle. Let’s gather more soldiers, win your own castles!

2048 The Legend of Zhao Yun Puzzle