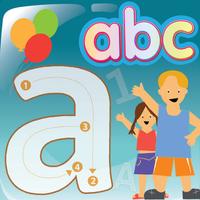 iPad
More Screenshots for iPad
abc 123 genius kids: english alphabet & number Description
Genius kids english alphabet & number handwriting - Learn Alphabet letter and Number is a best educational games for kids which provides learning alphabet, tracing letters and tracing number in a cutie manner so that preschoolers , kindergarten and toddlers learn number, abc and letter sounds quickly, learn to write number, abc and letter easily and with a lot of fun.
What does our alphabets & number learning app for kids teach your kids?
- Our alphabet games for kids to learn make your kid learn letters of english alphabet and learn number;
- This alphabet sounds learning app teaches to pronounce correctly vowels, consonants and syllables of the abc ,d,e,f,.... for toddlers;
- This number sounds learning app teaches to pronounce correctly vowels, consonants and syllables of the 1,2,3,4,5,6,7,8,9 for toddlers;
- Practice writing letters: our genius kids alphabet games include tasks in which a toddler learns to trace letters , number, and write letters and numbers;
- Playing our alphabet games your child will develop phonemic hearing;
- genius kids english alphabet & number handwriting contain a lot of alphabets and numbers, so your kids will have a strong vocabulary and memory;
- a to z alphabet for kids:
- 1 to 9 number for kids:
- This genius kids english alphabet & number handwriting provides sequential study of each letter: listen, recite, write uppercase and lowercase letters, learn the number that begin from 1;
- With the perfect pronunciation spell the letters and numbers so that your kids receives learning the sound and letters of the alphabet and number for free, and perceives all the sounds to the ear and utters them correctly;

How to play our genius kids english alphabet & number handwriting learning games for kids preschool:
Recognizing alphabet for kindergarten: Learn new letters
At first, only A, and a, letters and number 1 are open, but upon learning them, the kids will unlock new letters and number. Listen to the voice and repeat the words. Touch the arrow to proceed to the fun fence-painting lesson.!

The game is full of bright colors and amusing cartoon kids for education of children of preschool or kindergarten age. Any person surrounding your baby can be his or her playmate in obtaining the basic skills of reading and drawing, in finding out how to write letters and pronounce vowels, consonants and syllables.

u can shoot : bubble shooter Puzzle

run for U Adventure